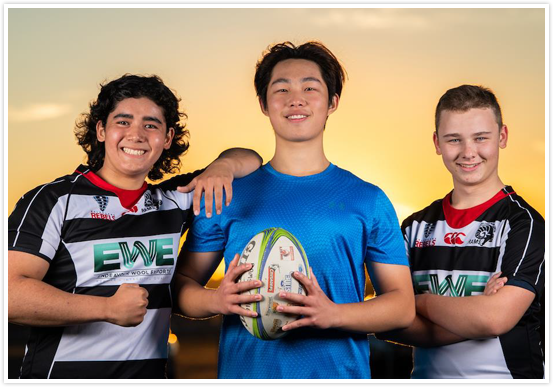 History of the Rams

The Club is fully incorporated and affiliated with the Victoria Rugby Union (Rugby Victoria) and its parent; Rugby Australia (Rugby AU). The Geelong Rams are located at Hendy St Reserve in Corio.

Over the last couple of years, the Geelong Rams have enjoyed stellar on and off-field success, including Division Premiers and Grand Final Winners, as well as awards for Coach of the Year and Player of The Year in 2015.  In 2019, the Geelong Rams were awarded the “Emerging Junior Club award at the Rugby Victoria awards night, a testament to our commitment at growing the sport at our junior levels, as well as being the year that we had our inaugural female team in the Touch 7s format.

We have won 7 premierships in seniors and two in juniors.

The Geelong Rams membership includes an all-volunteer staff, senior players, and a rapidly growing junior membership base. Since 2016, the Geelong RAMS juniors have grown substantially in their membership. In a famous AFL heartland, this is encouraging growth and is testament to the efforts of the Club and Rugby AU to make the game of rugby safer and more appealing to junior players. In addition, the social benefits of inclusion are evident with strong community links and friendships being created. Many of the Geelong Rams members are from the local community.

Rugby Australia Code of Conduct, Fair Play Code and Member ProtectionAligned with Rugby Australia’s guidelines and policies, the Geelong Rugby Club aims to ensure all participants are treated with respect and dignity and that they are provided with a safe and enjoyable environment in which to play or to otherwise be involved in rugby.The Geelong Rugby Club, its officers and members are governed by Rugby Australia’s Code of Conduct, as well as Sport and recreation Victoria’s “Fair Play Code” as detailed in the following links:

The Club is in the process of appointing their local Member Protection Contact (MPC) for the 2020 season and this will be announced shortly.  The incumbent will be responsible for applying <link text: Rugby Australia’s Member Protection Policy.

In short, we play rugby. But the Geelong Rams are much more than that, we’re part of a huge regional, national and international fraternity that all share a love and passion for the sport of Rugby Union. We strive to ensure that our game is safe and enjoyable by many and is as inclusive as possible, both on and off the playing field. Rugby Union is primarily played as an autumn and winter sport in Victoria.

The Geelong Rams’ Senior players commence their pre-season training in earnest by late January, with the expectation that they’ve been keeping fit over the summer.  With a few friendly games in March, the league tournaments commence in late April and run through to August with a finals series being played in September.

The Geelong Rams have both a home and an away series, with visiting Melbourne, regional Victorian and inter-State teams travelling to and playing at our home grounds. The Geelong Rugby Union Football Club works closely with both Rugby Victoria and Rugby AU and employs the “Smart Rugby” coaching practice in an effort to ensure that the sport is played in a safe and responsible manner.

All our younger games are closely supervised with reduced field sizes and on-field coaches assisting the referees and guiding the play. The Geelong Rams intend to field a number of junior teams in 2020 including U6, U8, U10, U12, U14 and U16 sides – young girls are also welcomed and encouraged as we grow our Touch 7s participation.